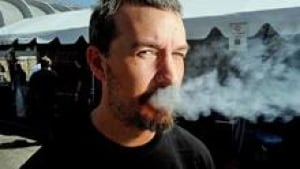 The level of impairment from smoking pot might not be as severe as alcohol intoxication, but it does require a public health response, a researcher says. (Noah Berger/Associated Press)

Smoking marijuana a couple of hours before you drive almost doubles your chances of having a serious car crash, say Canadian researchers.

The study led by Associate Professor Mark Asbridge from Dalhousie University in Halifax, is the first to review of data from drivers who had been treated for serious injuries or died in car accidents.

“To our knowledge this meta-analysis is the first to examine the association between acute cannabis use and the risk of motor vehicle collisions in real life,” the researchers write in the latest issue of the British Medical Journal.

They found that smoking cannabis three hours before driving nearly doubled a driver’s risk of having a motor vehicle accident.

But the level of tetrahydrocannabionol (THC) — the active compound in marijauna — in the blood that leads to impairment is unclear as most of the studies just measured for the presence of THC in the blood.

Only three of the studies reviewed measured precise THC levels in blood, which showed a positive relationship between THC concentrations and crash risk. But the researchers of this latest study say more evidence is needed to establish what level of THC causes impairment.

“Although we did not examine dose effects on the risk and severity of collisions, studies of fatally injured drivers found higher amounts of tetrahyrocannabinol in the blood,” they write, adding that this either indicates heavier consumption of THC or shorter timeframe between consumption and testing.

The findings back up previous experimental studies that show cannabis impairs motor skills important for safe driving and increases the chance of collisions.

The researchers say more work is needed to show whether cannabis smoking is a contributing factor for minor collisions.

While alcohol remains the substance most often involved in crashes, the researchers hope their work can inform public health campaigns and policies to control drug use and driving.

National data collected in 2004 suggested that four per cent of Canadian adults reported driving within an hour of using pot, the researchers said.

“The level of impairment might not be as severe as alcohol intoxication, but it’s there and it does require a public health response,” says Professor Wayne Hall from the University of Queensland Centre for Clinical Research.

But it is unclear whether road side drug testing is effective, argues Hall in a separate commentary in the BMJ.

“We’ve implemented this policy in most states and territories [in Australia] and there just doesn’t seem to be the commitment to finding out whether this has been effective or not,” he says.

The problem, argues Hall, is that roadside drug testing has been modelled on the success of random breath testing, but hasn’t been evaluated or implemented with the same rigour.

“We don’t really know if that’s worked and there are very important differences in which road side drug testing has been done compared with random breath testing,” he says.

While it is relatively easy to measure blood alcohol levels using a breath test, it is much harder to gauge impairment from concentrations of THC in the saliva, so governments use ‘zero tolerance’ to define impairment, he says.

“They’ve [governments] simplified it in a sense and avoided the issue of what the level [where driving is impaired] might be.”

The other issue is that road side testing hasn’t been as widely implemented or as well publicized as random breath testing, he says.

“I think we need to look at the extent to which people who use cannabis are deterred from driving when they use cannabis. Are they fearful of being detected? Is this a realistic deterrent?

“We need to do similar things with cannabis [that we did with random breath testing], and probably focus more on younger drivers because that’s where use is likely to be highest.”