Smoking marijuana may not harm lungs 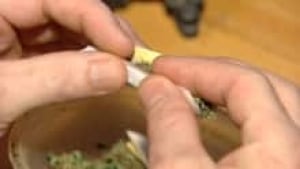 The study was published in Wednesday’s issue of the Journal of the American Medical Association.

It is hard to estimate the potential effects on the lungs from regular and heavy use of marijuana, researchers say. (CBC)

“With marijuana use increasing and large numbers of people who have been and continue to be exposed, knowing whether it causes lasting damage to lung function is important for public-health messaging and medical use of marijuana,” said the study’s senior author, Dr. Stefan Kertesz of the University of Alabama at Birmingham.

Kertesz and his colleagues analyzed a database of measurements taken from about 5,000 people who were aged 18 to 30 when the study began in four U.S. cities. The researchers compared the lung function of marijuana and tobacco smokers.

Increasing someone’s exposure to cigarettes resulted in loss of air flow and lung volumes. The air flow measure is the amount of air you can blow out of your lungs in one second after taking the deepest breath possible.

Marijuana exposure was associated with increases in those measurements, but not enough to consider smoking marijuana as a way to improve lung health, Kertesz cautioned.

Previous smaller studies also suggested that smoking marijuana isn’t as risky to the lungs as cigarettes.

No one knows why. It’s possible that the main active ingredient in marijuana, THC, that causes a “high” also fights inflammation and may counteract the effects of more irritating chemicals in the drug, said Dr. Donald Tashkin, a marijuana researcher and an emeritus professor of  medicine at the University of California, Los Angeles. Tashkin was not involved in the study.

Marijuana and cigarette use

As well, marijuana users did not specify a type of smoking method, such as joint, pipe or bong. It is also difficult to estimate the potential effects of regular and heavy use of marijuana, they said.

Both cigarette smokers and marijuana users can develop throat irritation and cough, which the study didn’t look at.

The research was funded by the U.S. National Institute on Drug Abuse.

With files from The Associated Press