Catching up with Kyla Williams 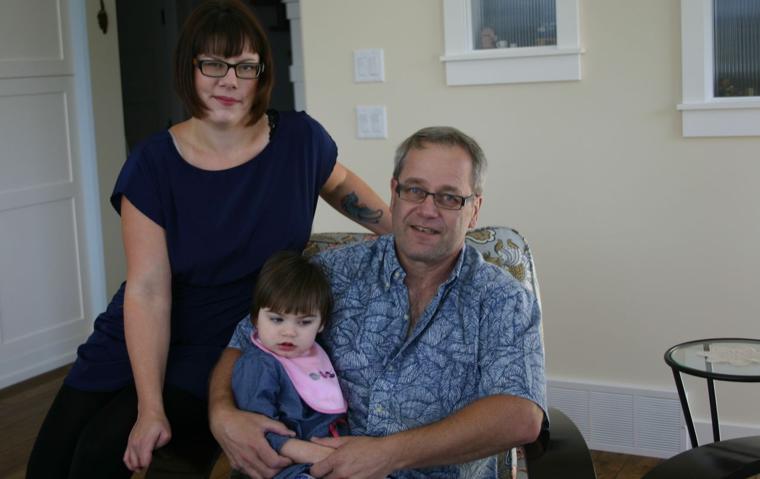 Showing improvement Chris Nuessler, above, holds his granddaughter Kyla Williams whose quality of life has been observed by her family to be significantly improved as a result of using cannabis oil. Recent medical tests support the family’s observation. A B.C. Court of Appeal Judge has ruled that it is unconstitutional to forbid licensed medical marijuana users from possessing marijuana derivatives such as the oils which Kyla is using. Also pictured is Kyla’s mother, Courtney Williams.

Medical tests corroborate the observations of Kyla William’s family that treatment with cannabis oil appears to be reducing the number of seizures the two and half-year old Summerland girl was suffering.

She had been experiencing hundreds of seizures daily.

Chris was the lead speaker at the seminar which featured presentations by a Vernon-based naturopathic physician, a medical doctor in Kelowna and an assistant professor of psychology at UBCO.

Chris described how Kyla, who has a severe seizure disorder, has shown dramatic improvement during the past few months since the initiation of treatment with cannabis oil.

In fact the results were observed almost immediately.

The family turned to cannabis oil after doctors said they had exhausted their treatment options.

Cannabis oil is high in cannabidiol (CBD), the compound used to treat conditions such as Kyla’s, but low in THC, the psychoactive component that is associated with pain relief and which causes the high that is attractive to recreational users of marijuana.

“She still has light seizures when tired but she is now more alert, much more socially interactive and is even sucking her thumb again,” Chris said.

He pushed his own thumb against his cheek and said, “She had lost so much motor control on the drugs the doctors were giving her that she couldn’t even get her thumb into her mouth.”

“Kyla cannot walk, cannot talk and cannot hold herself up. We don’t know what the future holds, but we do know that her quality of life is so much better now,” he said.

After Kyla’s check-up at the hospital, parents Courtney and Jared Williams were “over the moon” at the good news said grandmother Elaine Nuessler.

“The EEG did not show any spasms or seizures and the doctors said the abnormal brain activity was improved,” Courtney told her parents in a phone call.

The Williams and Nuesslers are astonished at the nation-wide interest in Kyla’s condition.

“I continue to get phone calls almost daily from parents of children with seizure disorders,” Elaine said.

The family is also overwhelmed by the support they are receiving from diverse groups.

Recently, an internationally recognized neuroscientist volunteered to study Kyla in hopes of elucidating more precisely the nature of her disorder and effect of cannabis oil.

“There is a definite need for rigorous scientific investigations. Recently clinical trials on medical marijuana as a seizure treatment were started in the United States,” Chris said.

Kyla’s family welcomes careful studies to determine the exact composition and concentration of each of the many compounds in the various strains of the marijuana plant and their effectiveness in treatment.

“We’ve had problems associated with the lack of information about the various strains—some work better than others—and the limited quantities available,” Elaine said.

A major stumbling block to scientific investigations along with the production and access to cannabis oil is that derivatives of marijuana such as oils or food made from derivatives are illegal.

Under the Marijuana for Medical Purposes Regulations, which came into effect April 1, licensed producers can only sell dried marijuana.

A recent ruling by a BC Court of Appeal judge may prove pivotal in changing the federal law.

In August, Justice Risa Levine ruled that it is unconstitutional to forbid licensed medical marijuana users from possessing derivatives such as cookies, body creams or oils.

The court challenge stemmed from the case of Owen Smith, who was charged with trafficking for baking marijuana cookies and producing cannabis creams for a medical marijuana club in Victoria in 2009.

“This case is undoubtedly headed to the Supreme Court of Canada,” Chris said.